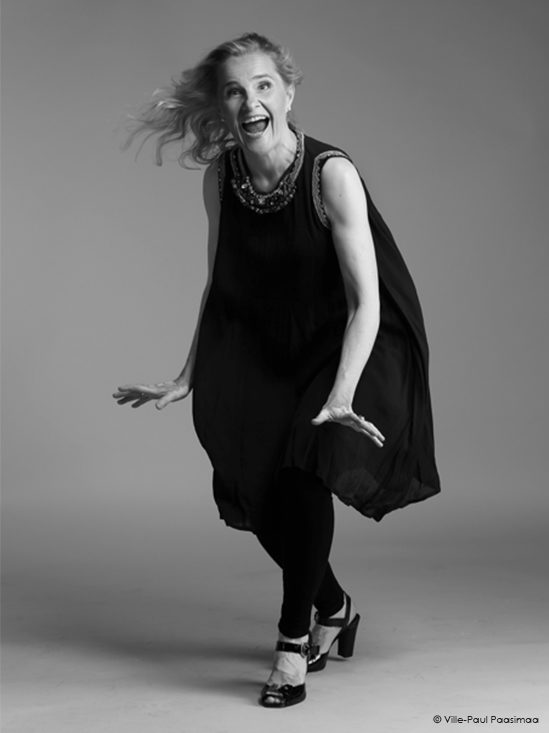 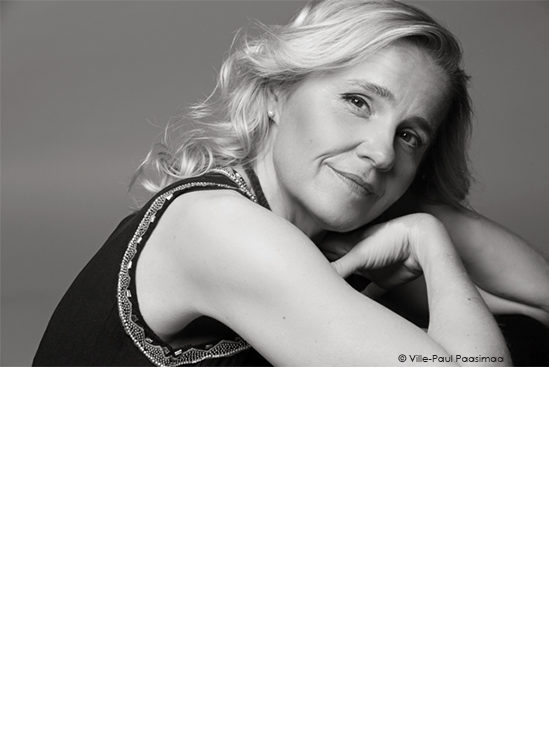 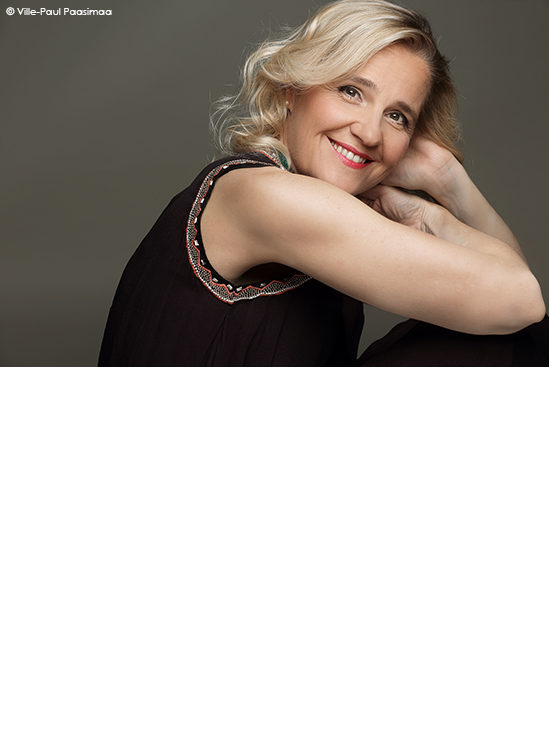 “Komsi’s voice is phenomenal, capable of extremes of pitch and textures beyond the range of most, combined with extraordinarily crisp articulation. Her voice is almost superhumanly elastic, her diction precise even in phrases as convoluted as those thrown at her by Joyce and Eötvös.” Anne Ozorio, Opera Today

“Most of all, though, the whole 40-minute work sets a fearsome test for any coloratura soprano, and Komsi passed it superbly, meeting every challenge with real operatic brilliance.” Andrew Clements, The Guardian

The Finnish coloratura-soprano Piia Komsi is known for her virtuoso technique and her exceptionally high and flexible voice. She is a successful international performer of baroque, classical and contemporary repertoire – whether on the opera stage and concert podium or as a soloist of chamber music and lieder. She has been a muse to many contemporary composers.

In May of 2017, Komsi made her successful debut with the New York Philharmonic in Esa-Pekka Salonen’s Wing on Wing, a piece that was written for Piia Komsi and her twin sister Anu Komsi. Since its premiere with the Los Angeles Philharmonic at the Walt Disney Concert Hall in L.A. in 2004 under the baton of Salonen, the two sopranos have been performing the extraordinary work at renowned concert halls throughout the world.

Piia Komsi’s breakthrough was as the Maid in Thomas Adès’ opera Powder Her Face. Her operatic roles have included Martha in Le Malentendu by António Panisello, Gepopo and Venus in Le Grand Macabre by György Ligeti, the Duchesse de Guise in Massacre by Wolfgang Mitterer, Pamina andQueen of the Night (The Magic Flute), Brunnhilde (Richard Wagner/Jonathan Dove: Ring Saga), Medea(Pascal Dusapin: Medeamaterial), The Cat (Unsuk Chin: Alice in Wonderland), and the cello-playingdaughter (Heinz-Juhani Hofmann: Ahti Karjalainen), among others. She has beenengaged by major opera houses including the Bayerische Staatsoper in Munich, the Théatre etMusique in Paris, the Teatro Comunale di Bologna, the Teatro di San Carlo Napoli, the Finnish National Opera in Helskini and the Teatro Colón in Buenos Aires.

Wing on Wing, composed for the opening of Walt Disney Concert Hall in Los Angeles, is a huge, celebratory piece that deserves to survive beyond its original purpose thanks to its big imagination and the chance it offered to hear Anu and Piia Komsi, the Finnish high-wire soprano twins.
Financial Times, December 2017

Attractive woodwind riffs bubble up through the curtain-raiser Gambit, and the writing for the phenomenal Komsi twins, Anu (Mrs Oramo) and Piia in Wing on Wing, previously heard performing the work in the same hall over a decade ago, never repeats the opening siren-like formula for them as they move around the hall. It would be hard to imagine this half-hour extravaganza without them; anyone resistant to the confrontational glamour of the piece would still have to make obeisance to their luminous blend of the vocal and the instrumental.
The Arts Desk, December 2017

Piia Komsi, soprano is a virtuoso, she convinces us in the interpretation of a woman with the shattered mind who is almost no longer able to express phrases, but only fragments, debris, clumps of memories, crossed by what psychiatrists call “intrusive thoughts”: you cannot foresee, control, when they arrive and devastate you, presenting yourself as your true reality.
LA STAMPA, October 2017

Piia Komsi was magnificent, a coloratura soprano with astounding expressive skills. She interprets the lament with her voice, the sounds she produces come from deep within her head, using instruments of the rarest agility and precision. Her singing is music, her body an instrument perfectly tuned and trained. This is an excellent performance, which confirms her reputation as a truly great coloratura soprano whose technique and musicality are of the finest. She reveals the astounding ability of Pascal Dusapin to discover compelling vocal lines, not only because they are extreme, but also because he is able to design for them a most refined orchestral accompaniment, based on structures that I would rather call crafted than mechanical.
OPERACLICK, October 2017

Here their parts were sung with voluptuous colorings by the sisters Anu and Piia Komsi. Forward-looking, glamorous and over the top, “Wing on Wing” is the perfect homage to Los Angeles and its eye-catching concert hall. The New York Times, 21 May 2017

And the outstanding soprano Piia Komsi, taking over from Barbara Hannigan, was equal to its extreme demands, smoothly switching between English, ancient Greek and German.
Financial Times, October 2016

Most of all, though, the whole 40-minute work sets a fearsome test for any coloratura soprano, and Komsi passed it superbly, meeting every challenge with real operatic brilliance.
The Guardian, October 2016

Although Barbara Hannigan was scheduled to sing, I was thrilled to hear that Piia Komsi was stepping in at very short notice indeed, for Komsi’s voice is phenomenal, capable of extremes of pitch and textures beyond the range of most, combined with extraordinarily crisp articulation. Her voice is almost superhumanly elastic, her diction precise even in phrases as convoluted as those thrown at her by Joyce and Eötvös. She embodied the Sirens, supernatural beings who defy the boundaries of Nature. Komsi’s death-defying flights up and down the scale could drive one mad with rapture. Komsi is a vocal gymnast, but so poised that she can make the ethereal sound perfectly natural.
Opera Today, October 2016

The focus of the evening was the world premiere of Eötvös’s The Sirens Cycle, settings of James Joyce, Homer and Kafka for high soprano. The extraordinarily demanding vocals were taken on superbly by Piia Komsi (sister of Anu) at short notice, following the withdrawal of Barbara Hannigan. Komsi was amazing.
Classical Source, October 2016