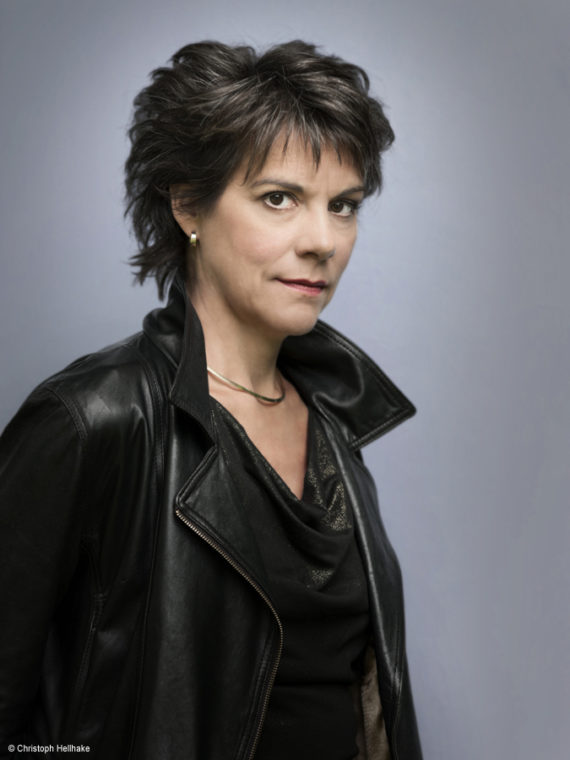 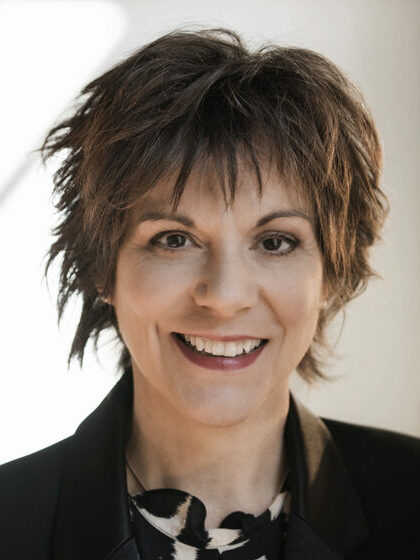 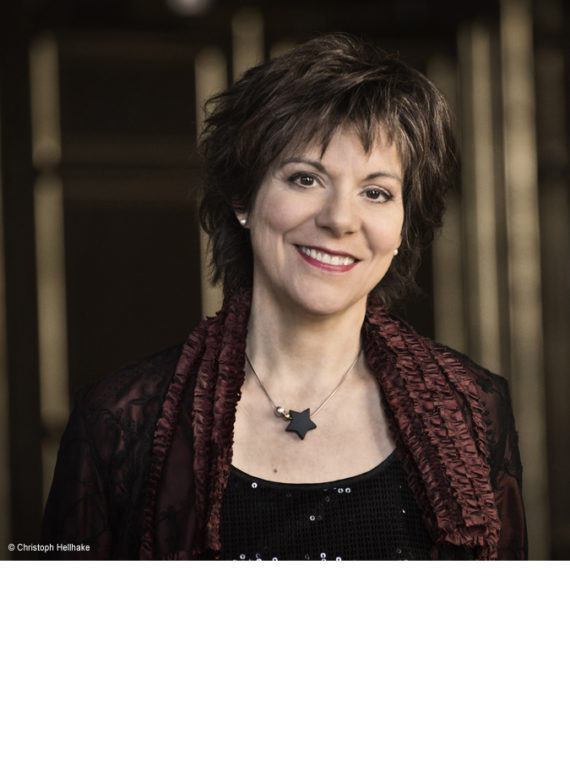 Salome Kammer’s talent transcends musical boundaries. Her repertoire defies categorisation and is comprised of a mix of avant-garde music, virtuoso voice experiments, classical melodrama, Lieder recitals, Dada poetry and Broadway songs. Whether performing as a singing actress or as an acting singer, Kammer’s stage presence in musical cabaret and theatre roles is fascinating. Numerous contemporary music works have been dedicated to and premiered by her, both nationally and internationally. Composers such as Helmut Oehring, Wolfgang Rihm, Georges Aperghis, Bernhard Lang, Isabel Mundry, Mauricio Sotelo and Carola Bauckholt have dedicated works to her, inspired by the manifold facets of her voice and her exceptional expressiveness.

Salome Kammer has wowed audiences in numerous productions of new operas including Helmut Lachenmann’s Das Mädchen mit den Schwefelhölzern at the Staatsoper Stuttgart and the Opéra National de Paris, Jörg Widmann’s Das Gesicht im Spiegel at the Bayerische Staatsoper in Munich, and Isabel Mundry’s Die Odyssee – Ein Atemzug at the Deutsche Oper Berlin. She sang in Peter Eötvös’s Lady Sarashina at the Opéra National de Lyon, Opéra Comique Paris and Polish National Opera in Warsaw to great critical acclaim, as well as in Ligeti’s Aventures & Nouvelles Aventures in Munich. She has performed a staged version of Kurtág’s Kafka Fragments with violinist Carolin Widmann internationally many times. She gave her debut at the Berlin State Opera/Schillertheater in Brice Pauset’s solo work Exercices du Silence in 2011 and sang the role of Elsa in Sciarrino’s chamber opera Lohengrin at several theatres in 2014. In 2019, the world premiere of Felix Leuschner’s Requiem für einen Lebenden followed at the Opera Festival Munich at the invitation of the Bayerische Staatsoper.

Numerous radio and CD productions document Salome Kammer’s exceptional talent, among them a recording of Schönberg’s Jakobsleiter (Harmonia Mundi) and Lachenmann’s Mädchen mit den Schwefelhölzern (Kairos). Her latest CDs I hate music, but I like to sing (Capriccio), salomix-max (wergo) and I’m a Stranger Here Myself (Capriccio), all chronicle the results of her long-standing collaboration with the pianist Rudi Spring and received rave reviews.

In the current season 2022/23, Salome Kammer will perform the Swiss premiere of Toshio Hosokawa’s children fairy tale Deine Freunde aus der Ferne with the Tonhalle-Orchester at the Tonhalle Zürich und will premiere new works by three young composers at the Impuls Festival Sachsen-Anhalt.

Salome Kammer teaches Contemporary Music for Voice at the Munich Conservatory. She is laureate of the Schneider Schott Music Prize and has been honored with the Magister Artium Gandensis from Ghent University.

During a journey in 1899, Russia becomes an initial experience for Rainer Maria Rilke: the sound of the language infatuated the young poet as did the width of the landscape and a great love. For it is Lou Andreas-Salomé that leads him to the Volga. Without Russia and this woman, Rilke might never have become this phenomenal poet. An evening with letters and compositions by Lou Andreas-Salomé, Paul Hindemith, Hans Krása, Dmitri Shostakovich, Alexander Skrjabin, Ernst Toch, Winfried Zillig, Bernd Alois Zimmermann, Marina Zwetajewa – and of course Rilke himself.

I’m a stranger here myself

The foreign
fascinates us.
The foreign
awakens desire in us.
In the foreign
fear, uncertainty is our company.

The composers Kurt Weill, Hanns Eisler and the poet Bertolt Brecht all have experienced these fascinations and abysses of the far and foreign. What a fortune is must have been when in Berlin’s 1920s Weill and Brecht met such great success with their songs, which repeatedly described the far and the foreign. Hanns Eisler, a politically active fighter for the labour movement, had set Brecht’s writings to music in a very simple, almost Schubertian manner and included the subtle allusions to the class struggle in his songs, whose vigour stands the test of time.

When the circumstances in Nazi Germany turned out to be catastrophic, Brecht, Weill and Eisler were forced to leave their home country. The political exile began to be a dangerous journey into the unknown. The yonder that once was longingly sung of now became the foreign, where previous accomplishments no longer were valid. Thus, the most opposed artists came together in California. Their shared destiny brought them together in a new way.

As you make your bed, so you must lie in it (Songs from all love situations)

Bertolt Brecht, the title giving word-artist of this programme, has repeatedly dedicated himself in his poetry to the incomprehensible drive of desire. But both before and after Brecht, this subject had and has moved all large and little minds. During this song recital the most widely varying perspectives of love are found: a woman’s and a man’s point of view, of paradise’s snake to the fall into the earthly hell, of a fatuous belittlement to coarse realism, of decency and moral, of seduction and drive, of fluffy red chambers and of misery in the gutter, of easy girls and of bawds, of beauty and of aging, of lust and of money, of alcohol and of violence, of closeness and of loneliness, of condemnation and of illegitimate children, of love and of sorrow… .

And just as love appears in its dazzling dress, the song will also sound in all its stylistic diversity: in a lied of romanticism and early modernism, in “Brettl”-songs, in the ballad, in a blackletter ballad, in a chanson, in a song.

Salome Kammer is instantly mesmerising as Elsa through her stage and vocal presence. She purrs with her vocal cords, bills and coos, whispers, breathes fast text passages, makes rhythmic plopping sounds with her lips. What at first seems strange soon has the audience under its spell: just as words are formed from letters, so too does this vocal landscape, at first so unfamiliar, develop into a very clear and heartfelt narrative style.
Neue Presse, Coburg, 2014

Kammer generates a breath-taking psycho-acoustic portrait of Elsa through gasping, whispering, snorting, chortling, speaking, chirruping and finally also singing. She switched virtuously between situations and characters and in so doing, allowed a uniquely vibrant world to be portrayed on stage.
NWZonline.de, Jan 27, 2014 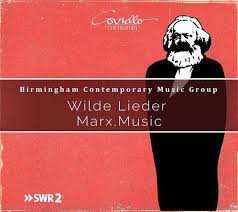 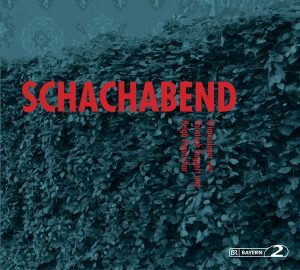 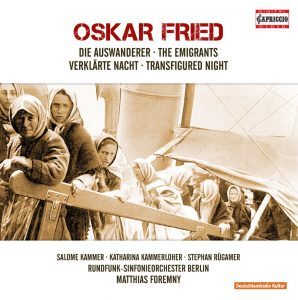 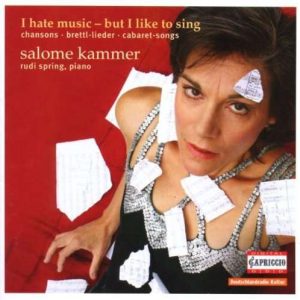 I hate music – but like to sing
with works by Hollaender, Schönberg, Weill, i. a. 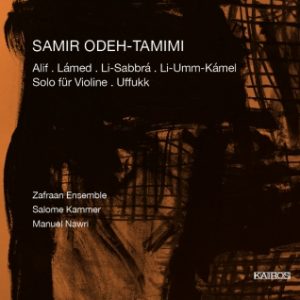 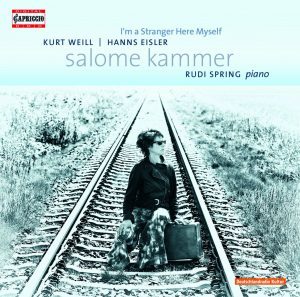 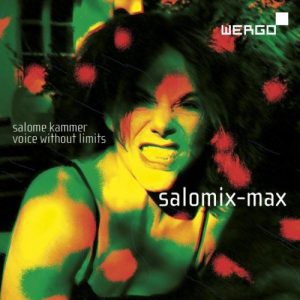 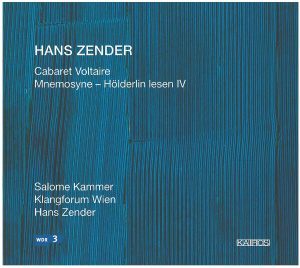