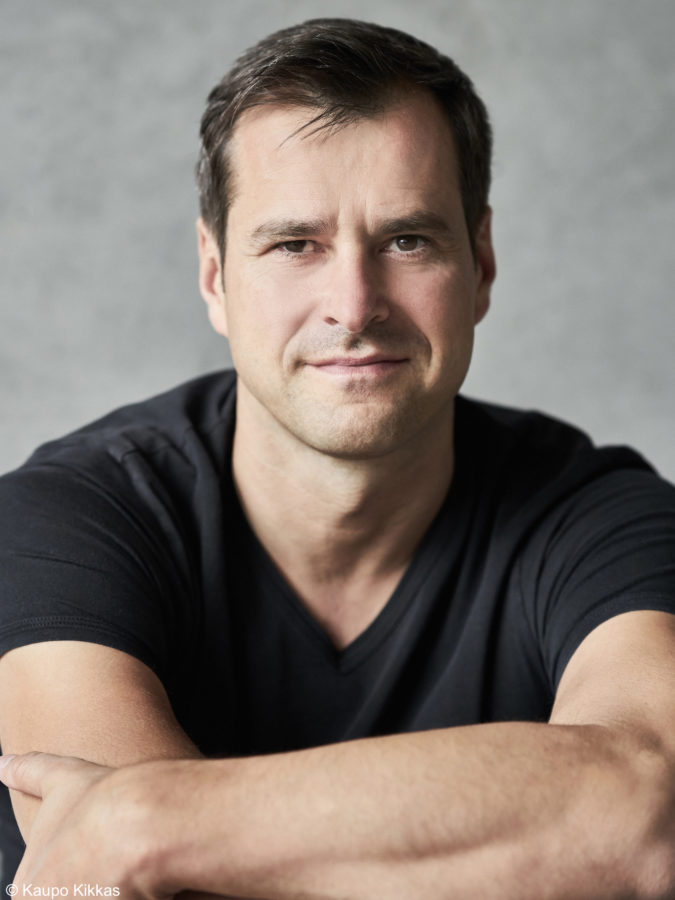 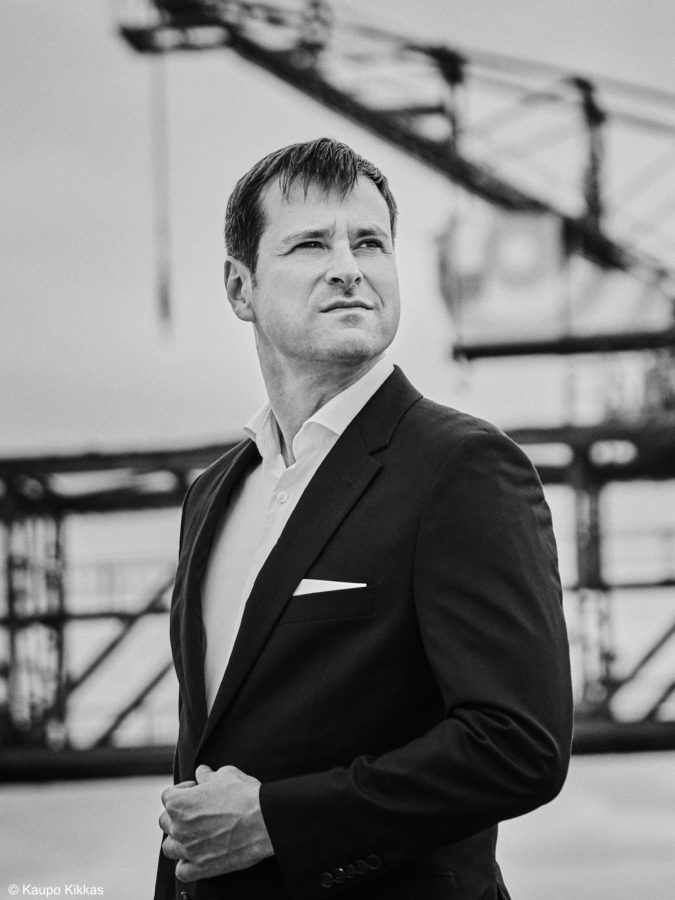 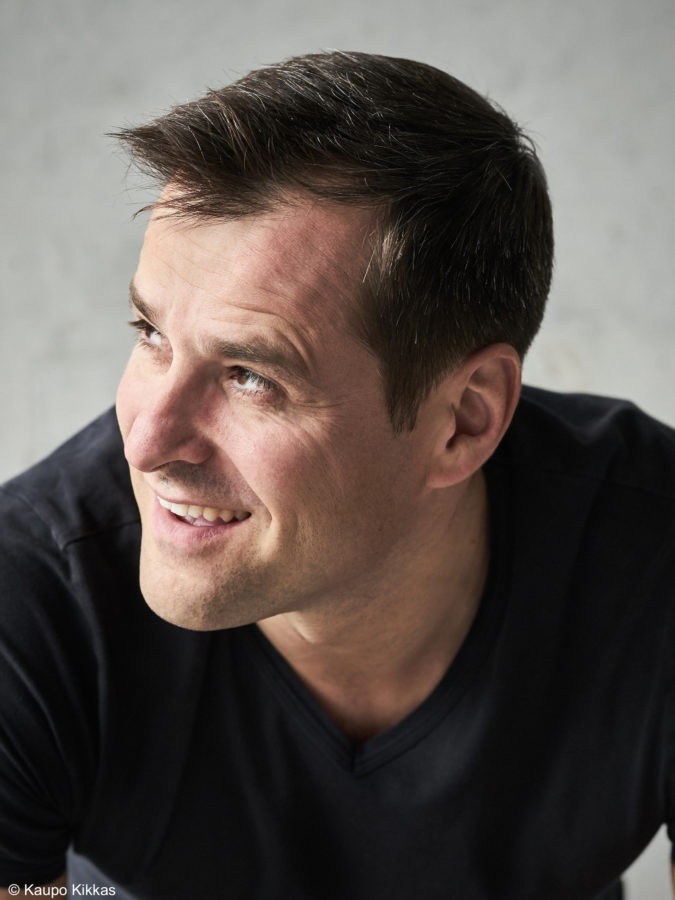 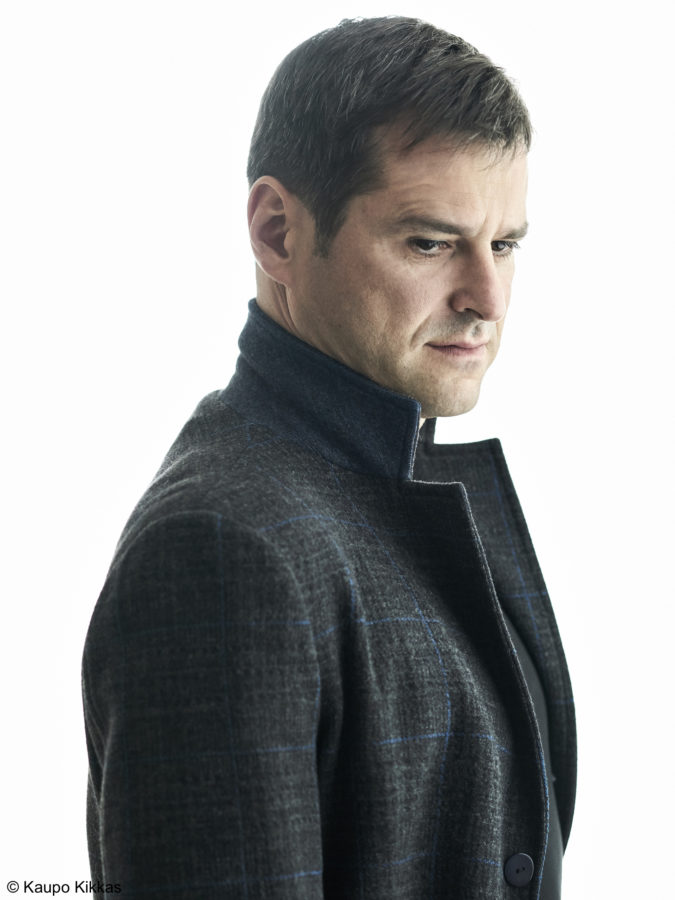 “Falk sings with a tremendous tonal range that refuses to allow the audience to remain oblivious to the music involved: it is as though the lyrics are biting deeper into the ear with each syllable, each note. (…) Falk’s capacity for creativity is sensational”, as die ZEIT and the Washington Post reported: “Falk is able to characterize every word so vividly that, if he were singing in Vedic Sanskrit, you’d get the message“. Flexibility, vibrancy and immediacy of expression make Holger Falk an internationally sought-after interpreter. With his multiple opera appearances as well as being an avid concert and lieder singer, he is a guest at major houses throughout Europe and the USA, working with renowned conductors and directors.

Holger Falk has a great passion for contemporary music theatre, and several new scores were composed especially for him: he sang the world premières of The Golden Dragon by Peter Eötvös at the Oper Frankfurt and at the Bregenz Festival along with Ein Brief by Manfred Trojahn at the Oper Bonn. He has been nominated three times as singer of the year by Opernwelt magazine for his outstanding interpretations of Kassandra in Iannis Xenaki’s Oresteia (2017), Johannes in Georg Friedrich Haas‘ Morgen und Abend (2017) and of Lord Byron in Michael Wertmüller‘s world première DIODATI. UNENDLICH (2019). He has also performed works by composers including Wolfgang Rihm, Kaija Saariaho, Beat Furrer, Georges Aperghis, Bernhard Lang, Miroslav Srnka, Vladimir Tarnopolski and Steffen Schleiermacher and has appeared at the Bayerische Staatsoper in Munich, the Staatsoper Hamburg, the Oper Köln, the Theater an der Wien, the Theater Basel, the Théâtre de la Monnaie Brussels, the Teatro Real Madrid, the Théâtre des Champs-Élysées Paris and the National Opera Warsaw.

In the season 2022/23, Holger Falk will premiere the new production AMOPERA with the Klangforum Wien and Jan Lauwer’s Need Company at the Festspielhaus Erl. Furthermore, he will perform the German premiere of Chaya Czernowin‘s Atara with the Bavarian Radio Symphony Orchestra and Matthias Pintscher at the Residenz Munich. He will also take part in the Festival Gemischter Satz at the Wiener Konzerthaus and in the production Himmelerde at the Opéra national de Lyon. He will present the programme Il Gondoliere Veneziano at the Scharoun Theater Wolfsburg i.a. and sing Brahm’s Ein deutsches Requiem at the Liszt Academy of Music in Budapest.

Holger Falk’s range of CD productions, including a four-part series of songs by Hanns Eislers (MDG), the complete recordings of the Mélodies et Chansons by Erik Satie and all 115 mélodies by Francis Poulenc (MDG) and Il Gondoliere Veneziano – a musical voyage through Venice (Prospero), received prestigious awards: German Record Critics’ Award 2017, CD of the Month (Opernwelt), Gramophone Editor‘s Choice Award, ECHO Klassik Award 2016 and Opus Klassik 2019 as Singer of the Year and best solo-recording vocal: Lied 2019. As Pizzicato writes of Holger Falk’s song interpretations: “[Holger Falk] does not attempt to artificially refine the songs, but instead sings them as genuinely as possible with the particular timbre of the genre, spirit and power matched with sparkling rhetoric, sometimes calmly contemplative, sometimes spirited and passionate or even teasing”. In 2022, the CD Keintate I, II (Friedrich Cerha) has been released (Kairos) together with the attensam quartett.

Holger Falk began singing as a boy with the famous Regensburg Cathedral Boys’ Choir followed by vocal studies at the Wurzburg Conservatory, in Milan with Sigune von Osten, Franco Corelli and with Neil Semer, among others. Holger Falk is professor of Lied interpretation and performances practice for contemporary music at the renowned University of Music and Performing Arts Graz.

Programme: „Amopera“ – a performance with material of the music theatre of the last 100 years

In Il Gondoliere Veneziano, the music and soundscape of Venice come together in an extraordinary way. As in the past, everyday sounds inspire the songs of the gondolier for a new musical interpretation. At the same time, the soundscape is influenced by the music, with everyday sounds turning into musical sounds and tones in reference to the gondolier’s music in a kind of sound metamorphosis. The programme is based around the “Canzoni da Battello”, performed by baritone Holger Falk, together with the baroque ensemble “Nuovo Aspetto”, led by Michael Dücker. The Canzoni da Battello are interspersed by the contrasting electro-acoustic Venice pieces by the duo Merzouga, which use baroque fragments as motifs, transposing melodic elements into the contemporary sound language, while preserving the integrity of the baroque music. The combination of these two approaches creates a Venice soundtrack as an overall, through-composed work. Church bells, voices, the sound of Venetian squares, the acoustic intimacy of winding alleyways, water, waves and beating paddles surround the gondolier’s singing.

Equally popular as a singer of opera and Lieder, Holger Falk finds exactly the right tone for this music: with a light sound that unites simplicity and sweetness in his almost tenor-like timbre. (…) Holger Falk changes colour in harmony with the musical surroundings like a vocal chameleon.
Hamburger Abendblatt, Marcus Stäbler, 20th April 2019

In a four-part CD edition, Holger Falk and Steffen Schleiermacher present the lied œuvre by Hanns Eisler. The CD Hanns Eisler Lieder Vol. 1 already received the German Record Critics’ Award 2017 and has been nominated for the Editor’s Choice Award of the Gramophone Magazine. The second CD of the series has been released in autumn 2017 to great acclaim. The repertoire can also be experienced on stage at a lieder recital.

The duo, which has been honoured with the ECHO-Klassik 2016 for its Erik Satie recording, shows a new perspective on Schoenberg’s pupil, who had long been reduced on his communistic work and pushed in a far left corner.

Both artists are convincing in their great diversity of expression, Falk’s precise understanding of lyric, and an impressive interpretation of the extremely versatile lieder by Eisler. The first CD presents lieder from a period between 1929 and 1937, which lyrics were mainly written by Bertolt Brecht and are first and foremost workers’ and battle songs. The following three recordings dedicate themselves to a particular period of time in Hanns Eisler’s creative work progress and range from workers and battle songs, chansons and art songs to 12-tone children’s songs.

Holger Falk has a beautifully mellifluous baritone, and in the more lyrical numbers it is wonderfully easy to imagine him singing to you in his gondola on a warm Venetian night (and getting an extra tip for it of course, at the end of the evening). But the songs aren’t all simply seduction numbers, and they vary greatly in character with Falk showing himself equally adept at the tongue twisting and the highly characterful. It is this variety which makes the disc such a delight, the mixture of the hauntingly lyrical, the plangent, the lively characterful and the down-right toe-tapping.
Planet Hugill, Robert Hugill, 2 July 2020

This is both technically dazzling and musically involving: a collection of canzoni da battello (…) from 17th century Venice, wonderfully sung by baritone Holger Falk and deliciously accompanied by period instrument combo Nuovo Aspetto.
Falk is in gorgeous voice, singing with a relaxed informality that’s irresistible, and the production values serve him so well.
theartsdesk.com, Graham Rickson, 20 June 2020

Holger Falk shows the full range of colour in his voice as he interprets these songs, he has been impressive throughout the previous three discs, showing great subtlety as well as intensity in his reading and he is truly excellent here.
Music Web International, Stuart Sillitoe, January 2020

With vocal and acting exaltation, he brings to life the figure of the torn, pleasure and sex-addicted, idealistic and ultimately lonely romantic hero.
Neue Zürcher Zeitung, Thomas Schacher, 23 February 2019

Falk displayed a masterful ability to create a distinct mood, atmosphere, and personality for each, whether dreamy and awe-filled in “Der Wanderer an den Mond,” or youthful and effusive in “Bei dir allein”.
Opera News, Steven Jude Tietjen, January 2019

Baritone Holger Falk makes outstanding Washington debut
Those fortunate enough to have been at the Phillips Collection Sunday afternoon heard what I suspect may be the outstanding song recital of the season. Their artfully conceived German and French program, Schubert and Hanns Eisler on the first half, Francis Poulenc and Erik Satie on the second, combined subtlety and power in a breathtaking display of ensemble virtuosity in captivating music. Falk has an extraordinarily flexible baritone, with a warm, confiding lower and midrange that, when called for, can go full throttle in a nanosecond. (…) But more important than his beautiful voice and perfect diction, Falk is able to characterize every word so vividly that, if he were singing in Vedic Sanskrit, you’d get the message. (…) Falk brings a light touch to Schubert, so that when things grow serious, the impact grips the heart. (…) afternoon of unforgettable music making.
The Washington Post, Patrick Rucker, 29 October 2018

The baritone’s voice is light in colour with an inherently gentle quality to it, but capable of impressive intensity in the upper range.
Gramophone, Hugo Shirley, September 2018

The testing title role was performed by that protean contemporary music specialist, Holger Falk (…), an inventive, responsive and compelling actor, he gave a remarkable demonstration of technique and musicality, with much lovely soft singing along the way.
Opera Magazine, May 2018

Holger Falk has a clear, cleanly focused baritone that can run the gamut from a honeyed piano to something more like an impassioned shout (…). There’s also an ideal balance between sophistication and rawness, a certain neutrality of interpretation that will bear repeated listening but doesn’t betray the gritty roots of the music.
Gramophone, Hugo Shirley, August 2017

Athena was embodied by the astonishing baritone Holger Falk, who also gave a tour de force of a performance as Kassandra, negotiating with ease the falsetto writing of Xenakis in a spectacular fragment with percussion accompaniment.
Opera Magazine, July, 2017

During the second scene of Oresteia, baritone Holger Falk vacillated wildly between his deep, low range and a higher falsetto, flinging his voice to the edges of human possibility in his portrayal of Kassandra who, in spurning the Greek god Apollo, has acquired the gift of fortune-telling simultaneous with the curse of never being believed. […] Despite the fact that few (if any) of the audience could understand the sung ancient Greek, the emotions of the characters, and particularly the desperation of Mr Falk’s Kassandra, came through with astonishing intensity. […] it was the soloists, Mr Falk and Tamás Schlanger, who stood out. After the opening scene Mr Falk stupefied us with his seismographic serenade; […] Mr Falk was communicating, the contortions of his voice and facial expressions spoke for themselves.
Bachtrack.com, 2 July 2016 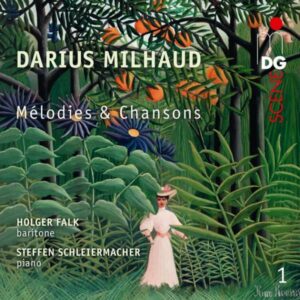 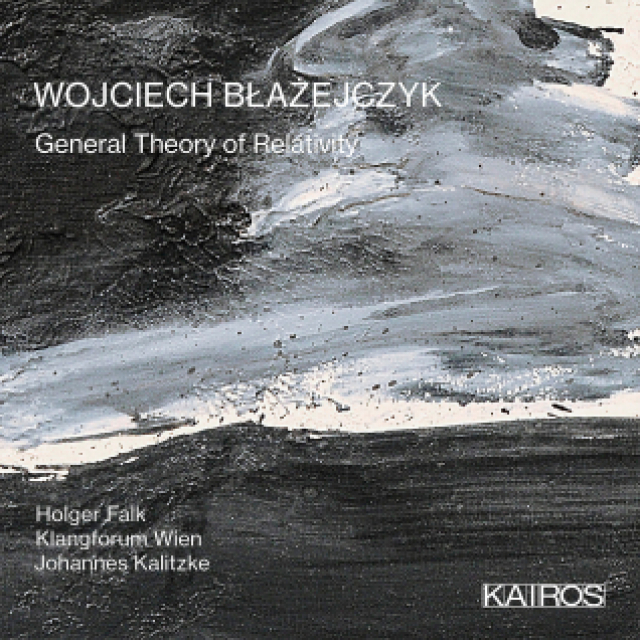 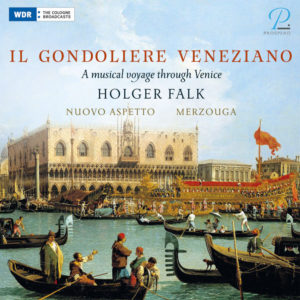 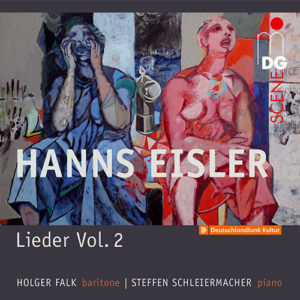 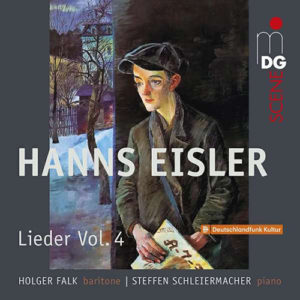 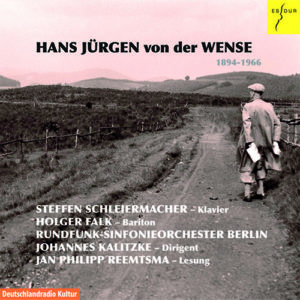 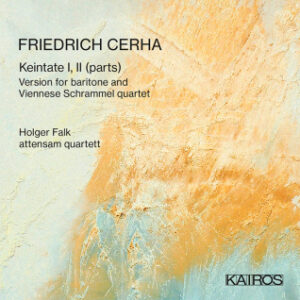 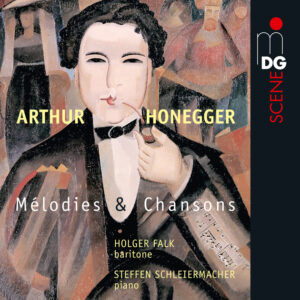 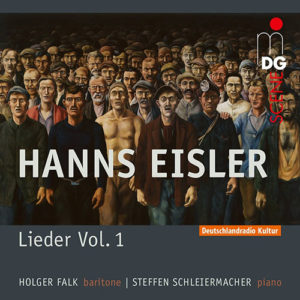 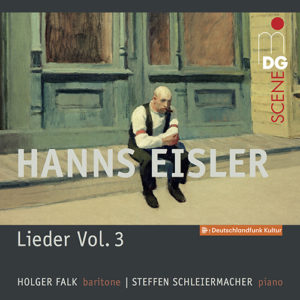 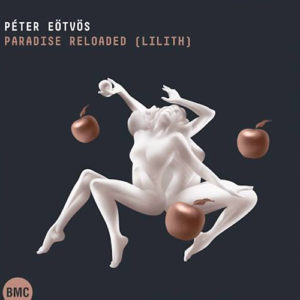 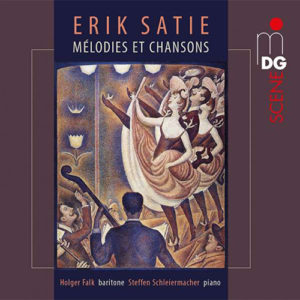 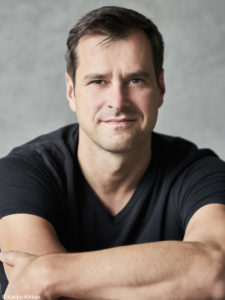